The Lecture Series in Environment Sustainability and Policy (ESP) brings individuals to campus whose work lies at the intersection of the science, policy and the human dimensions of societal challenges of sustainability in the 21st century.

The series represents a cross-disciplinary collaboration between faculty in the College of Arts and Sciences (Earth Sciences), the Maxwell School of Citizenship (Geography and Political Science) and the College of Visual and Performing Arts (School of Design) at Syracuse University. The ESP lecture series is supported by funding from Syracuse University’s CUSE (Collaboration for Unprecedented Success and Excellence) grant program.

Keeping Your Head Above Water: Preparing Sea Level Predictions in a Climate of Denialism (3:00 PM in Falk 175, McNaughton Hall)

Maria Caffrey (@Dr_Caffrey) is a former National Park Service scientist and research assistant with the University of Colorado Boulder. She was lead author of a 2018 National Park Service comprehensive report examining the impacts and risks of sea level rise and storm surges on coastal national parks. According to The Center for Investigative Reporting’s Reveal podcast, Caffrey resisted attempts by park service officials to eliminate references to human-caused climate change in the report. Ultimately, the report was released with referenced to anthropogenic climate change intact.

Life on a Scorched Planet: Are we paying attention yet? (6:30 PM in Maxwell Auditorium, SU Campus) 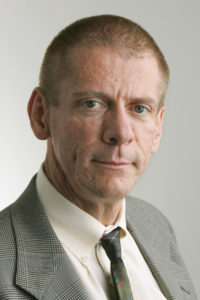 Justin Gillis (@JustinHGillis) is a journalist, author and consultant whose work is focused on climate change. Gillis covered environmental science for the New York Times for almost a decade. While at the Times, his Temperature Rising series on climate science and climate change earned him the Oakes Award from Columbia University’s Journalism School. Currently, Gillis is a contributing Op-Ed writer for the New York Times and is working on a book with Hal Harvey on accelerating the transition to clean energy.
(photo: Earl Wilson/The New York Times)

Robert Kopp (@bobkopp) is a Professor of Earth and Planetary Sciences at Rutgers University and is the Director of Rutgers’ Institute of Earth, Ocean and Atmospheric Sciences. Among other climate change initiatives at Rutgers, Kopp helps direct the Coastal Climate Risk & Resilience Initiative that crosses natural science, social science, engineering, stakeholders and urban planners around the threat of climate to global coastlines.

Reclaiming the Atmospheric Commons: Carbon Pricing in the U.S. and Canada (4:00 PM in 113 Heroy Geology Laboratory)

Leigh Raymond is professor of Political Science at Purdue University. In 2018 he was a Fulbright Scholar at the University of Ottawa, where he studied the attempts to implement carbon pricing schemes in Canada.  Raymond is the author of Reclaiming the Atmosphere Commons published by MIT Press in 2016.

Partly Green: The Past and Future of Sustainable Business (3:00 pm, Falk 175, McNaughton Hall)

tryside: Suburban Sprawl and the Rise of American Environmentalism (2001) as well as The Genius of Earth Day: How a 1970 Teach-In Unexpectedly Made the First Green Generation (2013).  He also is co-editor of Green Capitalism? Business and the Environment in the Twentieth Century (2017).  In addition to a book about recent efforts by American businesses to become more sustainable, he is working on the environmental-history volume for Oxford’s Very Short Introduction series.  From 2002 to 2005, he edited the journal Environmental History.